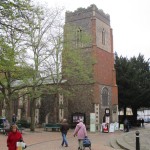 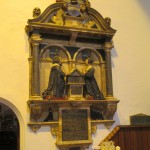 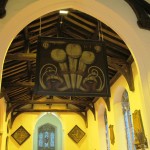 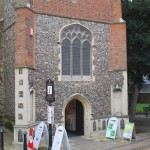 St Stephen’s houses Ipswich Tourist Information Centre, whose welcoming staff do so much to help visitors to the town and county. It was the first of our churches to be converted to its new use, and there can be few TICs anywhere to better it. Situated in Arras Square, the church, restored in 1994, with its outer patchwork of brick and stone, can at last be enjoyed uncluttered by the buildings which surrounded it for centuries. It is unassuming enough to be a small country church.

Although a church of St Stephen is mentioned in Domesday, the present building appears all to be in the late Perpendicular and Tudor styles; what we see was built in the 15th and 16th centuries. In the 1980s, professional archaeologists made shallow excavations in the nave and found the foundations of a wall, running east-west about four feet north of the arcade of the south aisle. The nave of the Norman church may have extended south from that wall, across the present south aisle, and the tall south porch may still contain the core of the original tower.