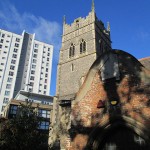 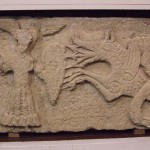 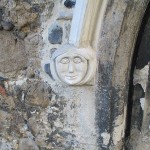 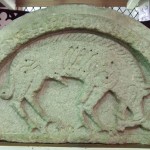 Boar typanum from All Saint's Church

The St Nicholas Centre, is once again the property of the Church of England. In it you will find many features of interest and a display of documents and illustrations provided by the Suffolk Record Office.

This was the church where the Wolsey family worshipped during the great cardinal’s boyhood. It was built almost entirely in the 16th century, but there was an earlier church on the site, probably with a different dedication. Two dormer windows lit the rood group at the chancel arch until the Reformation. The Lombardic letter monogram WS marks a chapel at the east end of the south aisle (now defined by a north wall), where William and Isabella Style and their son William were buried, whose brasses (and some for a Blois couple) are mounted on boards on the low windowsills.

The medieval font came by exchange from St Lawrence's in the 1860s, and the Romanesque sculptures - a boar tympanum, St Michael fighting the dragon, and figures of apostles - came from the Chapel of Our Lady of Grace in Lady Lane when it was dismantled in 1538. The first two were mounted outside high up on the west wall of the south aisle. Look for the mural memorial to William Beeston Coyte, whose Ipswich Botanic Garden was begun by his great uncle William Beeston in 1717. 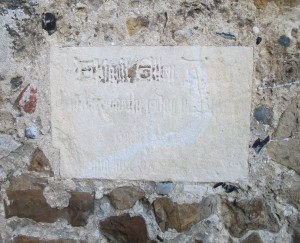 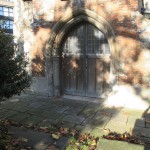 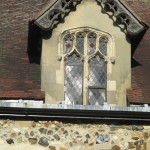 Dormer window to light the rood 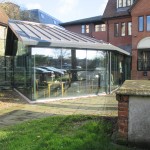 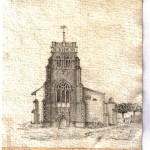 Frost drawing of 1800 - sculptures on wall