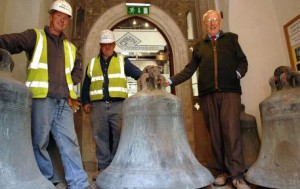 News Rebecca..John Blatchly, Chair of Ipswich Churches Trust and Cliff Fiske and martin Jackson of R & J Hogg with The Saint Lawrence Ring of Five Bells that have been taken down for cleaning…Pic Lucy taylor 28 04 09..My Photos24 Ref: lt 09 bells 2
mail_sender “Williams, Red”

THE oldest set of bells in the world are poised to ring out again – thanks
to a =A3100,000 renovation project.

The five bells of St Lawrence Church, which date back to the 15th century,
have not been heard for more than 20 years because the booming noise shakes
the tower.

Now the historic bells are to get a new lease of life at a specialist bell
foundry in London after more than 500 years.

And once a new frame is put in the tower at St Lawrence’s in Ipswich,
Suffolk, over the summer they will be rung again.

John Blatchly, chairman of Ipswich Historic Churches Trust, said: “People
will come from all over England and the world because they are the oldest
set of five bells in the world. It makes Ipswich unique.

“They are very mellow and it will be a lovely rich sound when they are
rung.”

“When we have ringers they will be visible because the belfry has a glass
screen.”

The bells, dubbed Wolsey’s bells because a young Cardinal Wolsey would have
heard them in his youth, date from 1450 and 1458.

They will be taken to Whitechapel Bell Foundry in London to be cleaned and
retuned.

In July the new frame, made of steel and cast iron, rather than wood, will
arrive and be installed in the tower at St Lawrence’s- eight metres lower
than the curre