The tower with the anchor on the bell opening 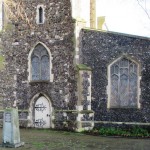 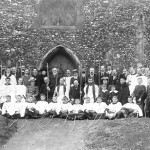 Group at the Church before setting off 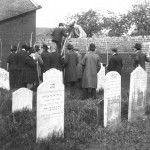 Climbing the far wall of the Jewish Cemetery 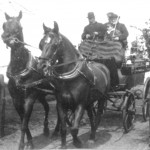 The brake carried those who preferred to ride

The main structure dates from the late 14th and early 15th centuries. It is the only church in Suffolk dedicated to St Clement of Rome.

In September 1995 St Clement's church was badly damaged by fire, but the Trust was able to put it back in order. Almost two-thirds of the roof covering was lost, but the Victorian rafter sections only needed cleaning. The Royal Arms of Charles II (1661), and many other inscriptions and memorials have been cleaned and conserved. The tower has also been restored by the Trust. The anchor in the square opening is a symbol of the patron saint, a reminder that this was one of the mariners' parish churches.

The black and white photos show Beating the Bounds of the parish in 1895.

The fifteenth century clerestory has single two-light windows set in a wall of flint and freestone-flushwork niches and pinnacles. Inside, look for the fine 15th century font, near which is the headstone of Thomas Cobbold, who brought his brewery from Harwich and used water from the fine springs in Holywells Park, (Ipswich, Suffolk) a warning on an amusing stone let into the wall of the south aisle, and several fine mural monuments in the chancel.

The church has been cared for by the Trust since 1981 and has finally found a new role as the Ipswich Arts Centre. 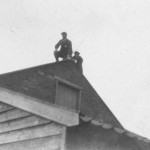 A layman and a cleric on Crisp & Smiths warehouse 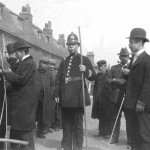 PC Pyatt conscious of his dignity throughout 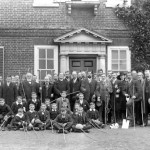 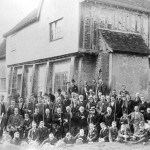 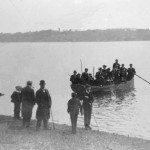